What can the Mosaic Blur Effects of Wondershare DemoCreator do?

Privacy is considered an important part of video creation and posting. The Internet has set certain boundaries and ethics that develop the need to protect the privacy of people that are present within different videos. The consequences of such acts can often lead to legal notices, which is by far neither acknowledged nor backed in any sense. For this, the mosaic and blur effect has developed its significance as a tool for protecting important content before publicizing it to masses. This article presents the different use of the mosaic and video blur effect that has been objectified by Wondershare DemoCreator. 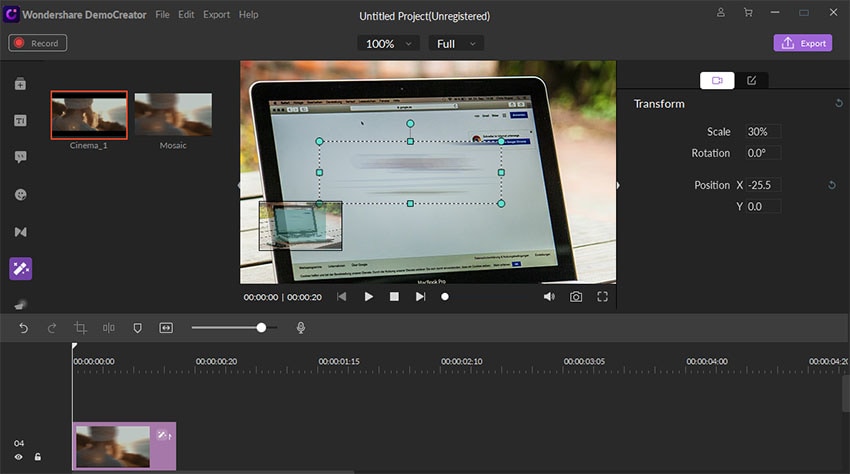 5 Ways to Use the Blur or Mosaic Effect in DemoCreator

Wondershare DemoCreator is a state-of-the-art video editor and screen recorder that has built its acclamation as a professional tool with impeccable video editing features. Mosaic and Blur effect is one hefty feature at Wondershare DemoCreator. To understand how this platform allows users to use this blur effect for video, you need to have a good look over the pointers presented as follows.

Use Blur or Mosaic to Remove Unnecessar Information can be controversial or unimportant from various perspectives. Apart from considering the basic perspectives of privacy and protection, there are different positions within the video where the provided information can prove quite distracting for the masses that could eventually divert their attention from the primary objective of developing the video. There can be other reasons for redacting such information, which leads us to the fact that using the blur effect on video can help the video makers deal with their concerns. Using the blur effect also helps the video creators to sustain the aesthetics of their video while de-emphasizing the unnecessary information hiding behind the curtains of the mosaic effect.

1. Use Blur or Mosaic to Remove Watermarks

Another particular application of the video blur effect that has been considered by the video creation community is for removing the futile watermarks present within the videos. Usually, the watermarks present damages to the complete aesthetics of the video, which defies the proper effect of the video itself. This 'giant figure' on the screen is what diverts the attention of the user. There are different platforms that provide the feature of removing watermarks from the videos; however, many people have believed this procedure to be quite strenuous in entirety. Thus, the use of blur or mosaic effect has expanded, making both the objective of saving the video and time simple and compelling.

2. Use Blur or Mosaic to Remove Personal Information

Everyone believes in respect of privacy and personal information. Many videos that consist of different versions of personal information brings to light over the use of a video editor with blur effect to blur out the information that can be somehow considered as personal. There are different videos that might consist of mailing addresses, phone, and account numbers. With the use of the blur effect in the video, you can simply hide such information. At times, the information could be different login details, including passwords that are necessary to hide for keeping the account safe from being illegally hacked or misused.

3. Use Blur or Mosaic to Highlight Other Part

If we propagate to the other use of blur or mosaic filters within videos, a very significant use can be pointed out where its utility can be directed for highlighting a specific part of the video. This could be considered from the fact that blur and mosaic effect makes it difficult or even impossible for viewers to see what detail is being hidden behind it. This would directly lead them to manage their interest in the part that is being left from blurring. Many video creators use this effect for fulfilling this purpose, which makes them highlight and bring the emphasis of their viewers over the specific part.

4. Use Blur or Mosaic to Show a Progressive Reveal in Video

Where the essence of the applications of blur or mosaic effect in video editing can be directed to protecting the privacy and identity of various people, it can be utilized for a deviated variety in video editing. Another use of this effect is to blur out the faces of different people, which can be referred to as showing a progressive reveal. The purpose of having this done is considered to protect the identity of the individual entirely throughout the video.

How to Use Blur or Mosaic Effect in Wondershare DemoCreator

There are many applications that have developed their ground in video editing. DemoCreator is considered one explicable application among many video editors where it looks to provide a variety of features to its users with ease. More importantly, the new version of Wondershare DemoCreator brings us a lot of new features, and Mosaic is one of them. To understand the method of using the video editor blur tool in DemoCreator, you need to follow the step-by-step guide as provided below.

Initially, it is important for you to install the platform on your desktop. Download it from the original site and install it by leading through the on-screen guide.

You can import the editable file from the appropriate option in the "File" tab or directly add it to the Media Library through the import icon present.

Step 3: Click the Mosaic Effect and Drag it on Timeline

With the video imported and opened for editing, you need to access the "Effects" button to choose Mosaic from the "Utility" section on the side menu. Drag the filter thumbnail over the inactivity bar of the video. 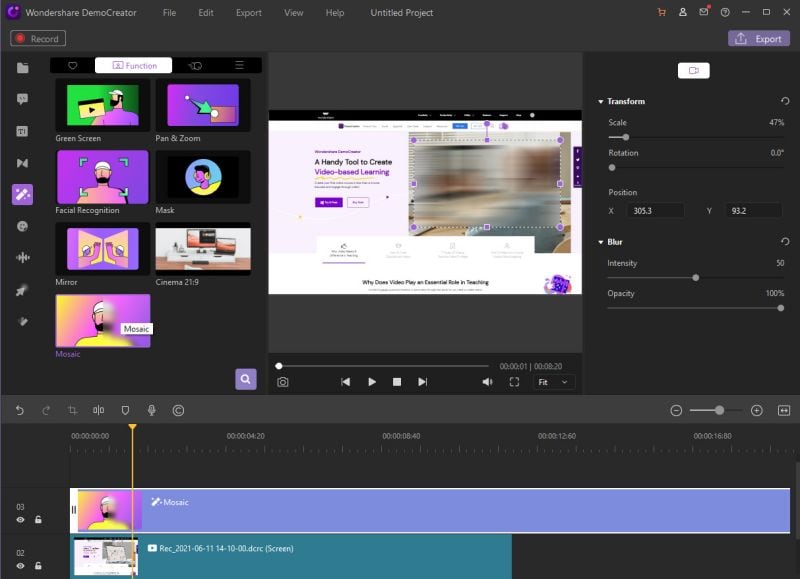 After adding the video blur effect, a square appears on the preview screen. You can simply adjust its size, relocate, or copy with your mouse.

This article has presented the different narratives that are considered while using the blur or mosaic effect in DemoCreator video editing. While considering its different utilities, this article has presented the method of using that particular effect in Wondershare DemoCreator so that video creators can easily use the blur effect for video with no hindrances.